"she was a grand lady full of southern charm & grace" 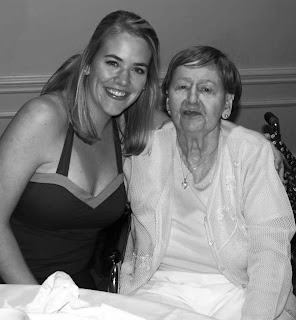 as a believer in Christ, i rest in the promise of the life to come and when a loved one dies, the faith that i have comes alive and Christ reassures me of His promise that this life is not the end, it's just the beginning.

i spent a lot of time over the last week pondering my belief and faith in God and what a truly amazing thanksgiving it was spending time thanking Him for choosing me.  i'm thankful for my belief in our amazing God of love, thankful for the wonderful family He has blessed me with, and thankful for the life i've been given!

my amazing mother wrote and read the following eulogy yesterday at the funearl for my grandmother and it was amazing!  i thought i'd share for anyone interested in reading (it's a tad long) about the wonderful life of my grandmother, carolyn.  i also want to place it here so it is never lost!

I would like to thank you for coming today. Since I’ve never done this before, I would like to claim Phillipians 4:13. I can do all things through Christ who strengthens me.


I met Carolyn the first time when I was about 15 ½ years old. I had just started dating Buddy and he took me to his house for dinner to meet his parents. I was scared to death! Even though we had no idea at that time that we would eventually marry, I knew he was an only child and there was probably no girl good enough for her son. She was cordial to me and we had a nice dinner which was probably a roast cooked with cream of mushroom soup and dry onion soup, cooked carrots or cabbage and those Pillsbury crescent rolls. Pretty standard fare for those days but when she brought out the dessert, I knew then what a good cook she was. As best as I can remember, it was homemade cream puffs. Flaky pastries filled with vanilla custard and chocolate syrup or it could have been white cake topped with peaches and that same homemade chocolate syrup, which might not sound very good, but is delicious. I learned that food was a big part of her life and cooking for her was a real pleasure.

Carolyn’s love language was definitely giving gifts. She incorporated this gift with her talent and blessed many a covered dish dinner at this church with her food. I’ve seen her take many meals to friends and families who were sick or had a death in the family. I’m sure many members of the Miller Class benefited from these gifts.

She and Bud joined this church in 1951 and had many friends in the former Mr. and Mrs. Class, which I think became the Miller Class. They loved going on the class trips and she was the self-appointed photographer. I think it was mostly because she hated having her picture made and we had to shame her into it sometimes by telling her that her grandchildren wouldn’t be able to remember her without some pictures.

She loved decorating and Holidays. She had almost every room decked out with the holiday theme and always made the best cupcakes at Easter, Halloween and Christmas which she always shared with the office and her family. She had every color-coordinated napkin, cup and paper plate you could imagine and you never went to her house without having some kind of snack there. We always lovingly said she was a “food pusher” but I like what John Crowell said to me this week in a Face book message. "She was a grand lady full of Southern charm and grace." Thank you, John.

She also remembered every birthday, anniversary or illness by sending someone a card. I think she single-handedly raised the Hallmark stock! She always included a check in those cards too and she would say “just take that and go out and have a pizza”. She loved her pizza and many Sunday nights at her house we would have frozen pizza and French fries. She made all the holidays special and on Christmas, she pulled out all the stops, ending with the most delicious dinner cooked by her that always included shrimp cocktail and was served at the most beautifully decorated table with all her crystal and china.

Carolyn was very loyal to her family too. She and Bud made many trips to Winston-Salem visiting their parents and siblings and when their parents were sick, they went every single weekend for months to visit and she never went empty-handed. She always brought homemade cookies and little gifts for them.

She had a very strong work ethic and was full of energy. She worked with Bud in the business for over 20 years, always brought work home, did her own cleaning and cooked for the week on Saturdays. She loved working in her yard and had beautiful flowers. She was quite the decorator too and enjoyed shopping. When we would travel with them, which we did a lot, she would bring her work. Then she would take a little break, always have homemade cookies and a Thermos of coffee (she didn’t want Bud to fall asleep coming home) and we would share that. Then you would see her head fall to her chest and she would nap until right before she arrived at her destination. She would wake up, put a towel on her lap, pull out her makeup bag and freshen up her face and hair. She was always very meticulous about her appearance. She made that once-a-week trip to the beauty salon to have her hair done and was dressed to the nines. She was a beautiful woman.

We did marry after five years of dating and I’m not sure she thought I could take care of Buddy like she could, but when we produced that first grandchild after almost five years of marriage; I knew that I had passed the test! She loved Alison so much and again she exercised that love language and showered her with gifts and used that God-given talent to teach her how to cook. They spent many hours making Jell-O and baking cookies. Almost eight years later when April was born, she did the same thing with April. They were very sweet to their grandmother and this past Wednesday night, April prayed over her grandmother. That was very sweet, April. I’m sure if she were able, she would have done the same thing with Mackenzie and Madeline. She always perked up when her “babies” came to visit her at Aldersgate.

We spent many years going to Ocean Isle Beach and then later Little River with Bud and Carolyn. She always prepared a big breakfast with bacon and eggs, grits, toast and jelly, coffed and juice. It was always at Easter when we went and we would go to the Easter service on the beach. The minister would go through the different denominations and you would raise your hand when he called out yours. It seemed that the Methodist and the Baptists always seemed about the same. The girls would take something out of their Easter baskets and dig in the sand during the service. We have great memories from those trips and enjoyed the time we spent with them.
Carolyn was quite the disciplinarian and didn’t hesitate to pinch Buddy when he was misbehaving in public and didn’t spare the spatula at home either if she thought he needed a spanking, but she loved him enough to do that. She raised him in this church, took him shopping, made him do chores and not just boy chores like mowing the grass or washing the cars, but hanging out the clothes and then folding them, or washing the dishes and cleaning his room or vacuuming. If she had only taught him how to cook, he would be perfect!!! They were best friends.

We had the normal daughter-in-law, mother-in-law differences of opinions, but I respected her and appreciated the gifts that she passed along in raising her son and decided a long time ago that when you love someone enough, you just don’t make waves. When we were at her house, we did it like she wanted it, and when we were at my house, we did it like I wanted it. No big deal. Even if I did hear her say many a time “Well, I never would have let Buddy do that!”

When Bud died, she was devastated. He was her right arm and she thought she just couldn’t live without him. She never complained at Aldersgate or Asbury, but where she is today, she has wanted to be for a long time. Carolyn was a 20+ year cancer survivor. It was a very rare cancer but over the years, scar tissue grew and grew and twisted her intestines shut. She had surgery in May and we weren’t sure she would make it then, but she did. When we would visit her, she would say “I just want to go home”. We would say “Mom, where is home? She would either say I don’t know but one day she said she thought she would get a new place. Another day she said to just put her in a Buick and drive her about 80 miles away. We assumed that she was talking about her old home place in Winston-Salem. Most days at Asbury she would say “I think today is my last day here. I think I’m going home tomorrow”.

We are grateful for the care-givers at Aldersgate and Asbury. They would tell us how sweet and funny she was and that she was their favorite. When we would ask her if they were being good to her, she would say “always”. We also appreciate the pastoral visits. When we would see Bob Arnold’s card on her night stand, we would say “I see that Bob was here and one day she said “I think he lives here now”. I told this to Bob yesterday and he said “I’m beginning to think that I do.” Many thanks to Bob, Andrew and Mike who brought her church to her. And a special thanks to the sweet ladies here at church who visited her with flowers and communion and the members of her SS class who came to see her. Those visits meant a lot to her and we really appreciate you being so sweet to her.

We will miss her but we’re very happy for her also. Isn’t it wonderful that we, as Christians, have the promise and hope of eternal life and will be reunited with our loved ones in Heaven? And aren’t we thankful that Carolyn lived a life that was pleasing to God? Happy Thanksgiving, Carolyn, and welcome to Heaven! Tell Bud we miss him!

Your strong faith is truly admirable. Your grandmother sounds like she was an amazing woman! Blogging about her is a great way to honor her life!

I am sorry for your loss A. We too lost my grandmother last month. We will miss her but had an amazing time remembering our lives with her. Thank God for faith and family. All my best...