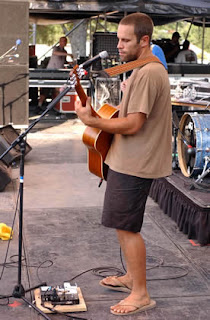 .jack johnson.
for the second time in my life ... & this year... i got to see jack live!
a good friend made the 3 hour trip yesterday afternoon with me to raleigh, nc to see mr. johnson play. we heard him at bonnaroo earlier this year, but had to see him again when we heard he was going to be close.
it was awesome. i love jack johnson. he's so chill on stage & such a good musician. i love the fact that he forgets the lyrics to his own songs & then proceeds to make fun of himself. he was accompanied by zach gill on the piano who just recently put out his first solo album, zach gill's stuff on 7.29.08 (check out the song family if you have the chance. lovely song)
last night was a perfect night weather wise too. it was a rare cool night for august in the south. the walnut creek amphitheatre in raleigh, where he played, is basically set back in the middle of no where. after we parked, we basically walked through a labrynth of parking lots in the woods to get to the main entrance of the venue, but it was gorgeous. i don't normally like seeing shows in large venues, but with jack, i had no choice.
he played so many of my favorites... banana pancakes, better together, taylor, bubble toes, wasting time... & i could probably go on, but i won't : )